The countries in the world differ by many parameters, one of the most important of which is the state of the nation’s economy. The scholars often use the classification of countries into developed (or advanced industrial) economies and developing countries. There are different criteria for determining the “developing” countries; one of the most frequently used criteria for classification is the level of gross domestic product (GDP) per capita. A country is classified as developing if it has GDP per capita less than $936.

Despite their comparatively low GDP per capita, the developing economies quickly evolve, innovate and grow both extensively and intensively. Some of the developing economies have gained significant economic power (e.g. China), and some of these economies are struggling. One factor which is strongly interrelated with economic development is demography and human population growth rates. The purpose of this paper is to select a developing country and analyze its demographic situation and population dynamics.

1. Selection of the country

While each of the developing economies has own specific challenges and growth issues, there is a special segment of the developing world which is worth attention and research. Among the developing countries, there are several countries marked as “hotspot” because of the combination of the following factors: scarcity of water resources, decreasing food production and rapidly increasing population (Zulu, Ciera & Musila, 2012). Such countries are facing the threat of famine and environmental disaster, and it is important to study economic and demographic situation in these countries in order to be able to help them, to be able to identify and prevent such situations in other regions of the world. One of such countries is the Republic of Malawi (Zulu, Ciera & Musila, 2012).

At the same time, the quick increase of population due to high birth rates is later reduced because of high infant mortality rates: total infant mortality rate is 79.02 deaths per 1,000 live births (Index Mundi, 2013). Mortality among male infants is higher than among female infants: 83.06 versus 74.92 deaths per 1,000 live births (Index Mundi, 2013).

High death rates are not only among infants, but also among adults. The estimates of population dynamics in Malawi explicitly include the high rates of AIDS, high infant mortality rate, high maternal mortality rate, etc. AIDS prevalence rate constituted 11% according to estimates done on year 2009 (Index Mundi, 2013). Life expectancy at birth in Malawi is comparatively short: 52.31 years – 51.5 years for males, and 53.13 years for females (Index Mundi, 2013). As a result of poor social and medical conditions, the median age of the population is rather low: 17.3 years total, 17.2 years for males, and 17.4 years for females (Index Mundi, 2013). This actually means that the population of Malawi started increasing at high rates not very long ago.

It should be noted that the actions of the current Malawian government has contributed to the increase of population. There was a remarkable decline in infant mortality by 35.1% during the 1998-2008 period (National Statistical Office of Malawi, 2013). Overall mortality has also declined by 50.48% (National Statistical Office of Malawi, 2013). At the same time, the demand for smaller families in Malawi is growing, but most married women who want to avoid pregnancy do not have the necessary means of contraception (Zulu, Ciera & Musila, 2012).

There are significant patterns of emigration in Malawi. Total number of non-return emigrants in Malawi was 128,681 people during the 1998-2008 period (National Statistical Office of Malawi, 2013). Figure 1 illustrates the dynamics of emigration by year and gender 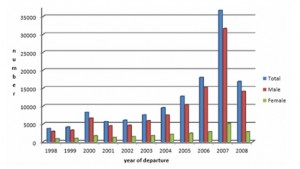 Figure 1. Dynamics of emigration in Malawi during the 1998-2008 period (National Statistical Office of Malawi, 2013)

The statistics related to the dynamics of migration is somewhat controversial. The net migration rate in Malawi, according to estimates made in July 2012, was zero (Index Mundi, 2013). At the same time, according to the data provided by the National Statistical Office of Malawi (2013), during the 1998-2008 period there were 1.6% of total population (205,000 persons) who stated that they were born outside Malawi (National Statistical Office of Malawi, 2013). However, this report does not indicate whether these people arrived during the 1998-2008 period, or stayed at Malawi before 1998 (so they cannot be included in the statistics for immigration during this period). Overall, immigration into Malawi can be evaluated as low or close to 0. This fact is quite expectable because this country is one of the poorest in the world, and the conditions there tend to deteriorate. There is a very high risk to catch major infections diseases such as malaria, plague, typhoid fever, etc. (Index Mundi, 2013).

The population of Malawi is growing at a comparatively high rate, despite high infant mortality rates (which has however reduced during the recent years) and high death rates. The increase of population in Malawi is reached mostly due to high women fertility rates and the government’s attempts to improve the situation with healthcare in the country. Unfortunately, Malawian government fails to address the need of the population to access modern contraception and reduce birthrates. These actions lead to unsustainable growth of population, which increases demands to the natural resources and causes unsustainable development. The population of Malawi might triple until 2050 (Zulu, Ciera & Musila, 2012), which means that their government should undertake urgent measures to avoid catastrophe. It is the responsibility of the international community and of the developed countries to assist the developing economies which undergo such hardships and help them get back on track of sustainable development.